Mike Dawes is a 24 year old English guitar player and touring musician. He has been hailed as one of the world’s finest fingerstyle performers.

His acclaimed solo music, littered with nuances and micro-techniques, has seen him tour almost every continent on the planet. He has recorded with and sessioned for multiple grammy award-wining artists, appeared on film and TV advert soundtracks, written for and been published in international music magazines, as well as achieving viral YouTube hits in the millions.

At 24 years of age, Mike has made a huge impact in a relatively short space of time. His persistent work ethic and entertainingly meticulous approach to composition and performance on a single instrument has seen raised smiles and dropped jaws all over the world. He is not a typical guitar player. On a single steel string guitar Mike is able to coax out the must unusual and subtle textures, whilst performing layers and layers of music simultaneously. Bass. Percussion. Harmony. Melody.

In a style that is hard to describe, the young Brit combines rock, folk, funk and pop music in an instrumental concoction that leaves listeners both confused and intrigued.

I guess you could call it ‘Instrumentalfolkpoprock’, or something – Acoustic Magazine Interview

In June 2012, Mike Dawes released his first solo instrumental through the US label, Candyrat Records. This incredibly detailed arrangement of Gotye’s smash hit ‘Somebody That I Used To Know’ took on a life of it’s own when it smashed through 1.5 million views in just one week online. Since going viral, the video found itself on the front page of Reddit, Colleghumour and hundreds of popular blogging sites. MSN new featured Mike on the front of their US web browser whilst Gotye himself praised the arrangement as his absolute favourite cover of the song, even inviting Mike to session at his studio in South Australia. 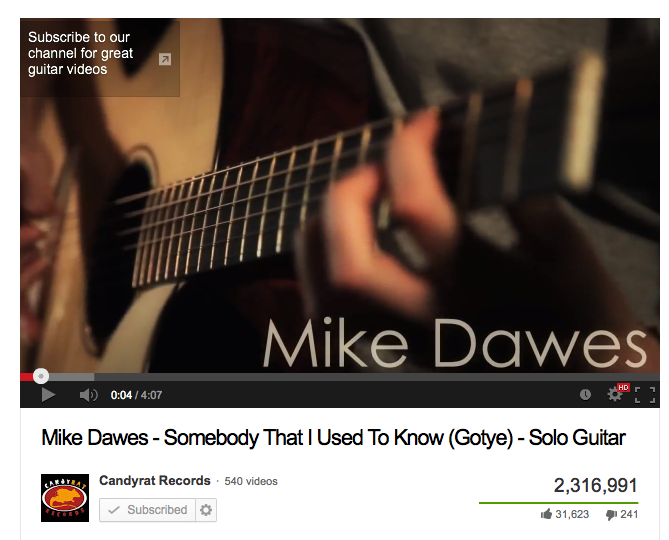 Since releasing his debut album, ‘What Just Happened?’ back in April 2013, Mike has been able to follow up on his acclaimed arrangement with a vast world tour that has taken him to all corners of the planet. The release was critically praised with consistent 5 star reviews from physical and digital media outlets, as well as users of iTunes, Amazon and more.

A perfect balance of emotion and technically superior skill, 12 out of 15 – Musik Reviews (Germany)

Mike lives on the road, performing constantly all over the planet from the USA to the Far East. In addition to performing, Mike is known for his guitar clinics and workshops, which he has taught all over the world to praise from guitarists young and old. This passion for teaching is evident in his bi-monthly columns for the UK’s Acoustic Magazine, as well as his frequent Skype sessions developing the guitar techniques of his loyal and willing participants.

The atmospheric nature of some of Mike’s music lends itself well to cinema and synchronisation. Mike’s song ‘The Impossible’ has featured on Indie releases in both the US and Turkey whilst his compositional style has been acknowledged by UK based loan company Wonga, who commissioned Mike to write and record for their Winter 2013 TV advertisement, in which a young man duels against a computer generated pensioner for acoustic guitar supremacy!

Mike began his musical adventure aged four, when his parents introduced him to The Blues Brothers. In his early childhood he experimented with keyboards before picking up his first electric guitar at 12. Instantly taking to the guitar, Mike quickly became involved with the local music scene, involving himself in numerous bands and projects. In 2003, at 13, Mike reached the semi-finals of Jimmy Page’s ‘Riffathon’ competition.

Having experimented with tapping techniques on his old Les Paul, in late 2007 he picked up his first acoustic guitar, A modified Taylor dubbed ‘Jean Claude’. He proceeded to embark upon a solo run which saw performances across southern England, it was during this time that he developed his style, a unique blend of genres with a touch of humour.
Since going solo, Mike has been honoured to share the stage with some truly world class musicians. He is currently writing and performing with Nick Benjamin’s 100th guitar (Alpine Spruce/Cocobolo), A beautifully rich sounding guitar that compliments his style perfectly.

He can make the guitar talk, with no effort – Jamie Bell (Actor)